Submitted by Wildrunner on 03 December 2018

The Pundits Said What?

The 100km Ultra-trail Cape Town saw disappointment, and some surprises, with three of the men’s race favourites, Rob Krar, Prodigal Khumalo and Ryan Sandes, being forced to withdraw and surprise names making it to top spot in both the men’s and women’s races.

German Janosch Kowalczyk, who has only started doing “big” races in the past two years, was thrilled and surprised at his win: “I did not plan to be on the podium, I dreamt of being in the top ten. 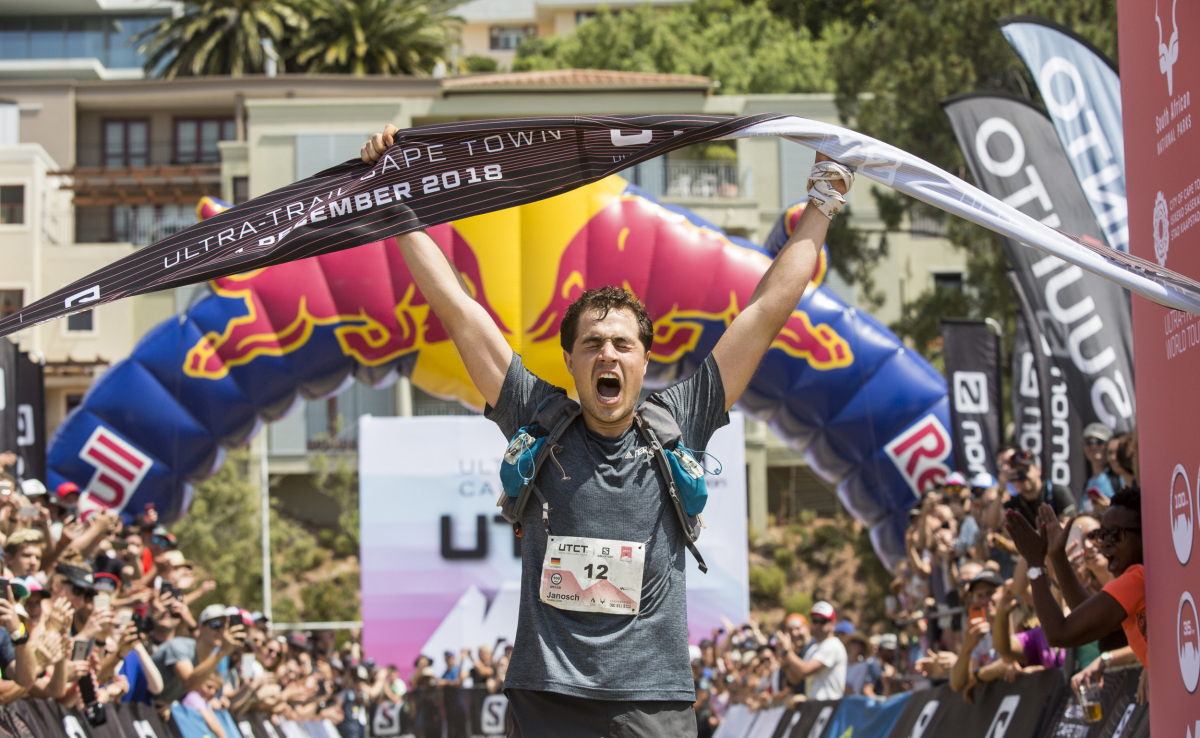 “I started at 15th position, and when the sun came up I started to catch people at about 20km. By 30-40km I was low, I was super-tired, and I could not really run fast because although it was flat and you want to run fast, you can’t see the trail, there are bushes and there are stones.”

Kowalczyk overtook Ryan Sandes on Suther Peak just before Sandes withdrew, and then he took his time at Hout Bay to take in liquids and nutrition.

“The crowd kept telling me I was fast and I was closing the gap on the leaders, and I started believing it. This is the perfect ending of the year for me. ”

Elov Olsson said of his race: “I ran by feel the whole day. I started with relaxed running, and tried to keep it that way the whole day. I struggled in the technical parts, but managed to get into a really good stride from the 60km mark until the finish.”

Defending champion Prodigal Khumalo was forced to withdraw at Constantia Nek at the 36,5km mark: “I have been battling with plantar fasciitis for the last 3 months. I was feeling better these last four weeks and I came to the race taking a chance. I was hoping to come and take it for the third time, but it’s one of those things, I will be back next year,” he said.

Ryan Sandes said of his withdrawal just after halfway: “After coming second to Prodigal last year I really wanted to try and go one better this year, and with Ultra-trail Cape Town attracting such a world class fields of athletes, you’ve got to go out there and take risks and chances, and I rolled the dice today and it didn’t go my way.

“Going up Suther Peak I was out of it, I was dizzy and dehydrated, and had to sit down, and lie down. I got some outside assistance, which unfortunately meant the end of my race.” 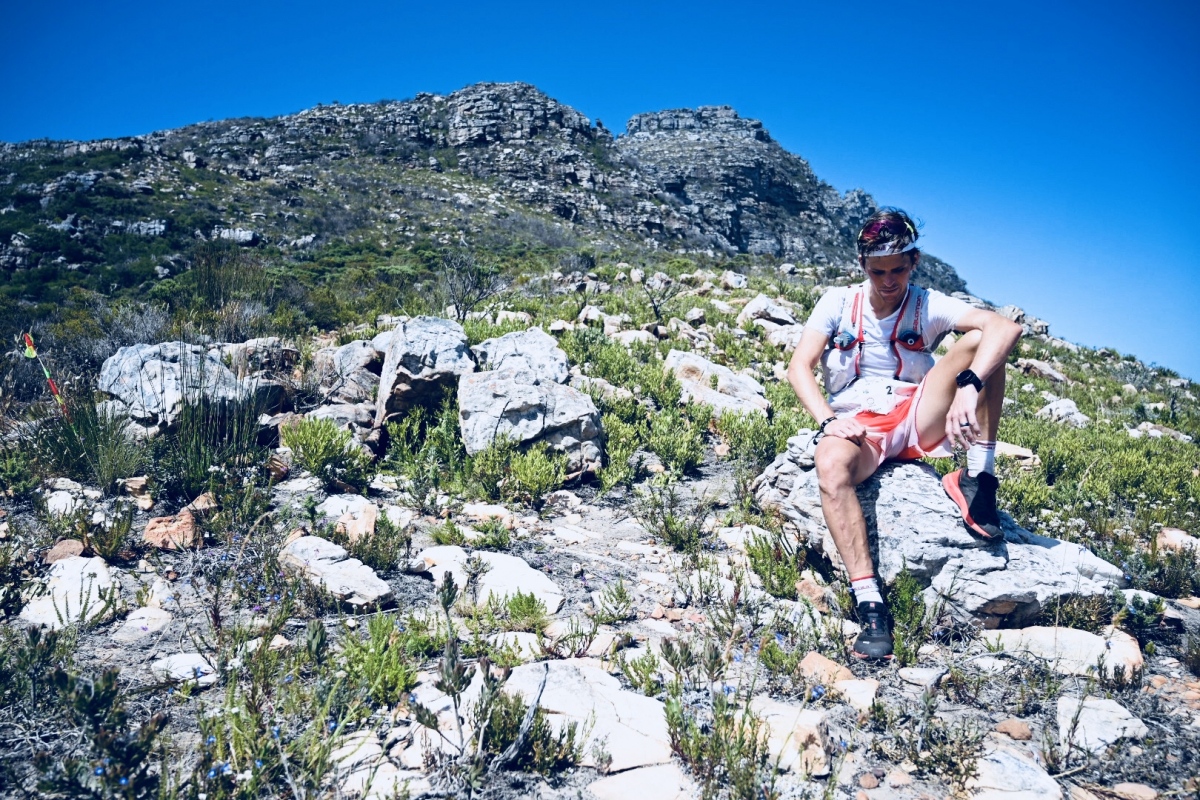 Greyling ran a race of many highs and lows. His game plan was to go out harder than he ever had before, and to take this, his last ultra for a while, head on. Dizziness and nausea on Suther Peak almost ended his race, but he isn’t one to stand down. He fought back from 6th place after the Alphen Trail aid station to gain 2 places.

First placed woman Emily Hawgood said: “This is the longest distance (I have run), I really felt the last 7kms, and it was really hot. I did a couple of really hot runs in Kariba last week which saved me with the heat, so I was ready for it. 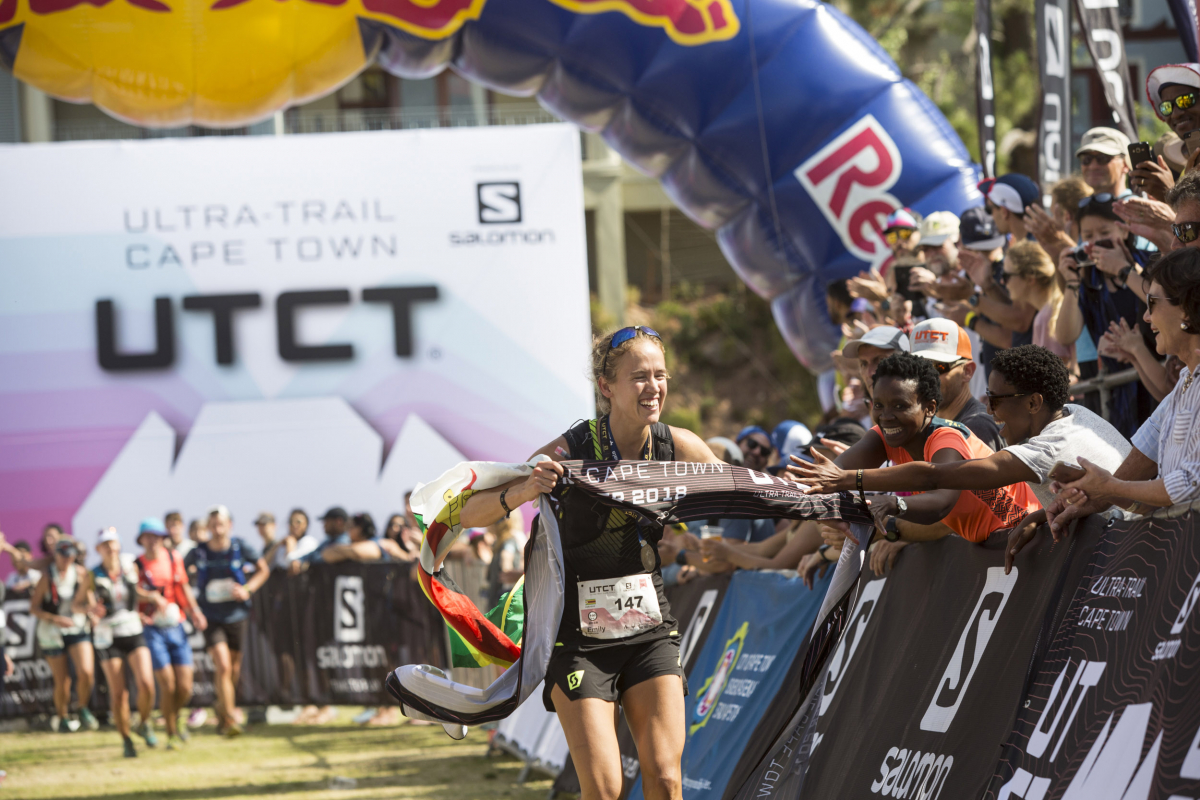 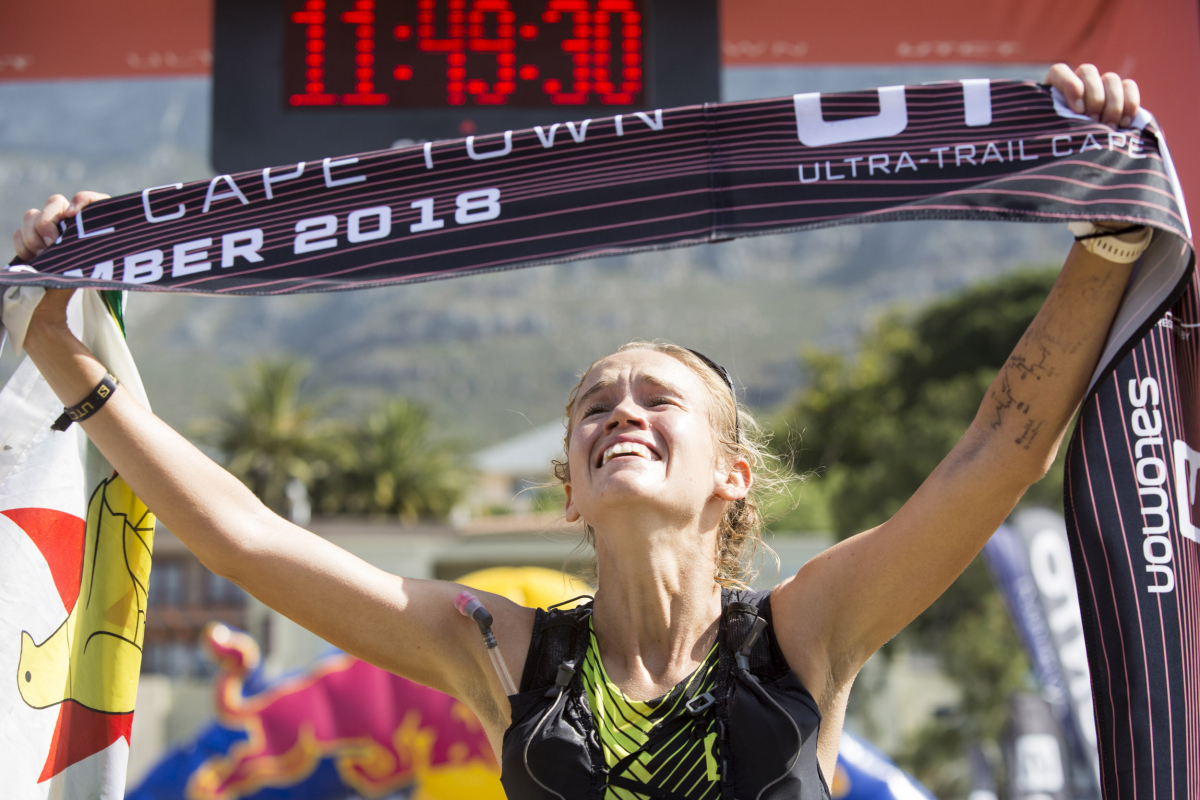 “I pushed hard to pass Mimmi at Alphen Trail, and then knew I had to push harder, because this final section last year nearly killed me in the 65km.”

Kerry-Ann, winner of the 2015 edition of this race, has been off the radar for some time now following knee surgery in 2016 and the birth of her daughter, Anna. Anna will be a year old this month, and her tenacious mom has made a stunning comeback, with gold at Comrades 2019 now firmly in her sight. She said “I am feeling very grateful to finish, and tired, and sore. It was an amazing race. I went into this race without doing a lot of racing this year, just training. I had no idea how I would perform, so it was good to see that the training all worked out. 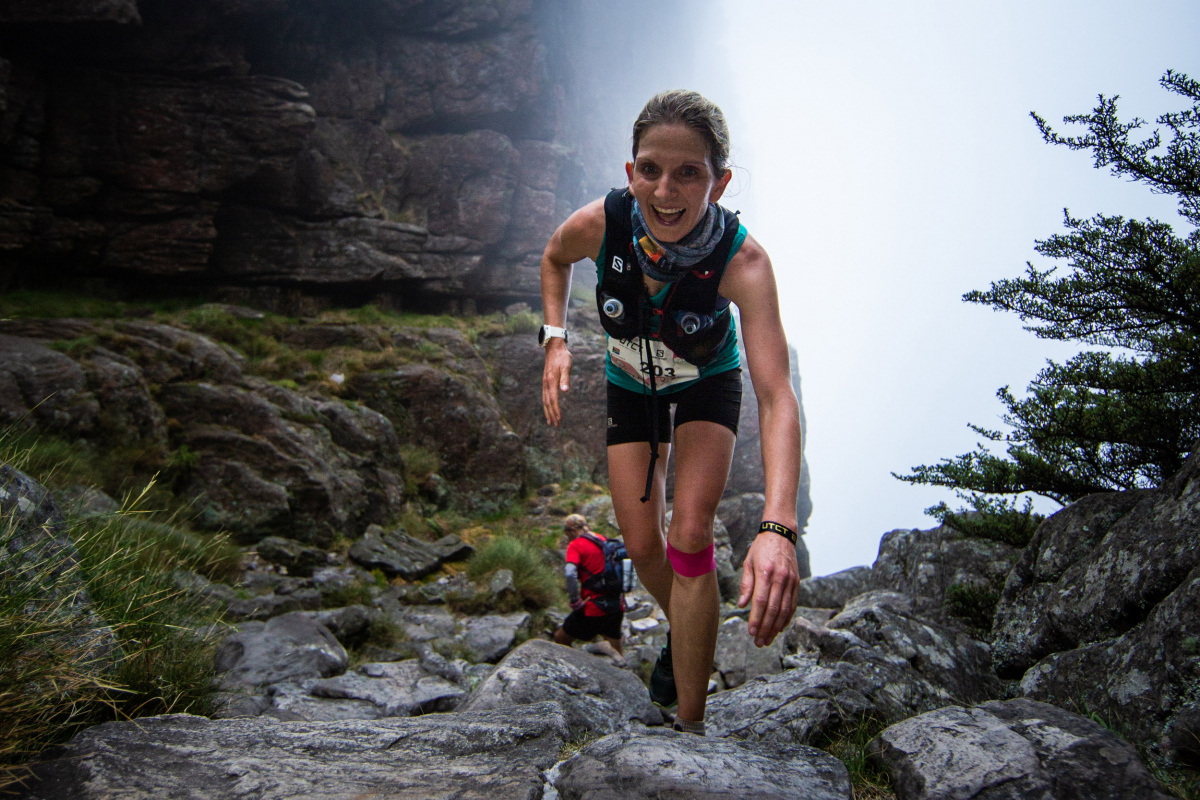 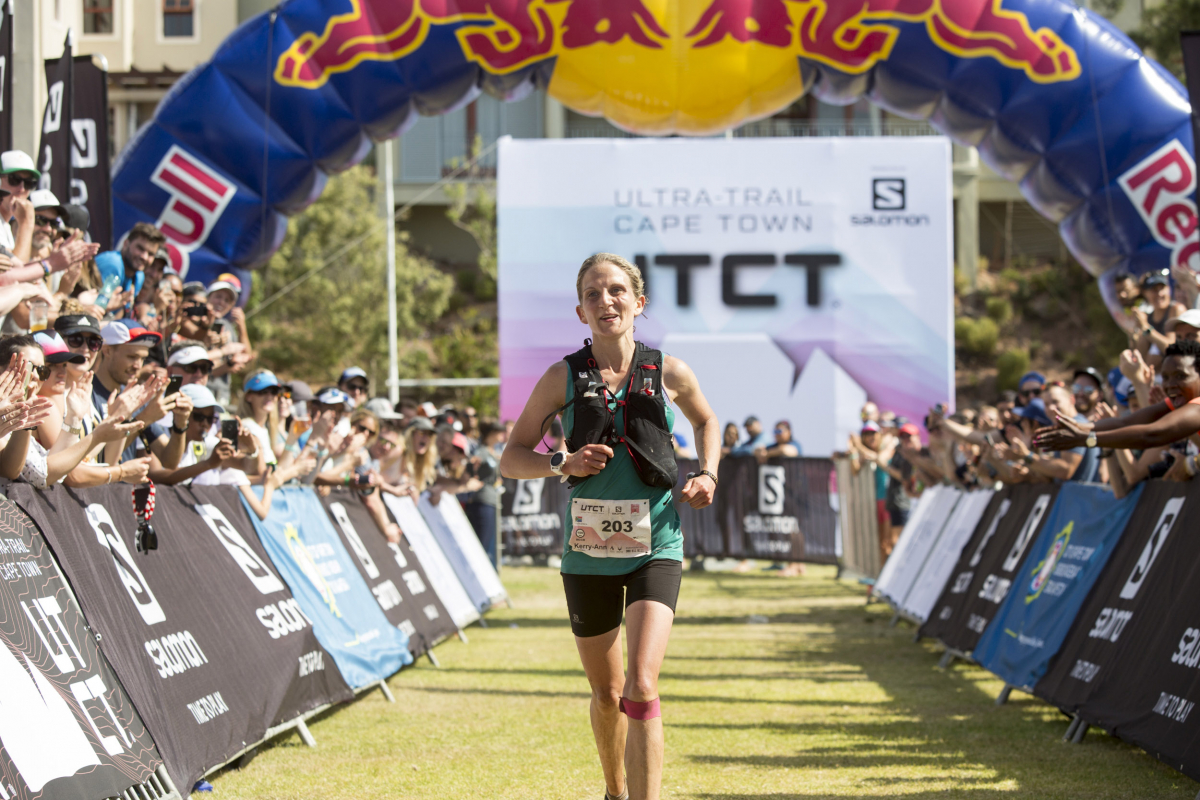 At UCT they told me I was 2 minutes behind Mimmi and 12 minutes behind Emily, so I thought I should just push. It helped so much that I knew the route, I knew the climb and the contour, so I knew where to push hard. I caught Mimmi coming off the mountain, and was able to pass her.”

Mimmi Kotka said she pushed hard in the first part of the race because she knew she would struggle with the heat later in the day: “I loved this course, but I knew that my odds were not good with the heat. We had -14 degrees Celsius when I left Sweden. So I tried to push early in order to get a decent result. I am very happy, and I think to have three girls in the top ten overall is really special. This is such a cool race. It’s technical, and hot.”

Ultra-Trail Cape Town, one of the events on the prestigious Ultra-Trail World Tour, has made its mark as a world class race, bringing visitors from around the globe to celebrate the trails of South Africa. Beaming race director, Nic Bornman, and technical race director, Stuart Mcconnachie stood proud at the closing ceremony on Sunday 2 December where a capacity crowd cheered their heroes and licked their war wounds. We’ve no doubt that 2019 will bring more of the same, and we look forward to the continued growth of UTCT.