Submitted by Wildrunner on 13 December 2019

On 1 December, the 100km Ultra-Trail Cape Town presented by Salomon (UTCT), was dominated by the international contingent in the mens and the womens races, with the performance of the day being Great Britain’s Beth Pascall’s convincing breaking of the women’s record by over an hour, and placing 9th overall.

A record 68 countries were represented across the 4-race event, with South Africans in firm support of the trail seasons grand finale. 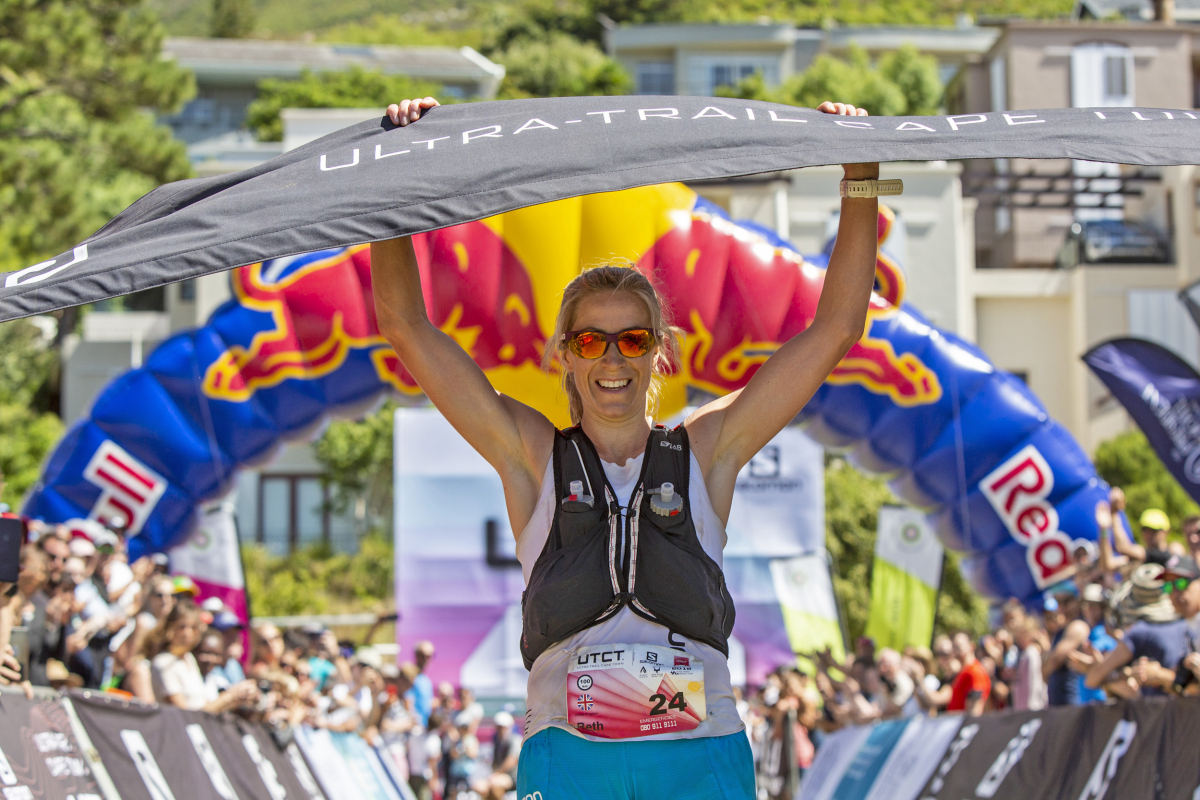 Cody Reed (USA) took the win in 10:04:58, with Francois D’Haene (FRA) in second place (11:11:22). Nicolas Martin (FRA) had led the race by a distance for over 70kms, ultimately though taking third place (10:14:10). Behind Martin early on was a pack that included D’Haene, Ugo Ferrari (FRA) and Johardt van Heerden (RSA). Cody Reed kept gaining and joined the pack, breaking away just after the Alphen trail in Constantia. Reed then passed Nicolas Martin between Alphen trail and UCT, but it is unclear at which point.

Reed says: “I knew the front half was hard with lots of climbing and that the second half fit my skills more, so I waited, took the climbs and relaxed during the first 40kms, passing people on the flats and then they passed me on the climbs. I passed Francois for the last time at the Alphen trail and he was right behind me for a while after that, but during the last 30-40km it was my time to go. It was at UCT that they told me I was in first place, I don’t know when I passed Nicolas.”

D’Haene says the day was hard for him as he was not feeling good from the start: “After 40kms I felt tired and thought it would be a long day. I really enjoyed the technical section between Llandudno and Hout Bay, I think I gained 5 minutes there. Cody and I ran a lot together but he passed me after Alphen trail and I didn’t see him again. He had a very solid race and I am very happy for him.”

“It was my first time here, I think I will be back, but I will have to change my training. The organisation was very good, the trails are really nice and the crews were excellent.”

Martin was disappointed with a third place after leading the race for so long: “It was fast at the beginning and then it became very rocky, and it was difficult towards the end. The technicality of the course just before UCT became extremely challenging for me.”

Johardt van Heerden was the first South African, taking sixth place in a time of 10:44:51. He said: “Running with Francois was magical, he is my trail running hero. I felt strong with the group until the upper end of Suther Peak and then I just felt terrible and thought my race was finished. I hung on until Hout Bay where the support was so amazing, and my parents were there, so I thought I have got to finish.

“I think I lacked endurance and was inexperienced on this kind of distance, so lots of lessons learned.”

Cape Town’s marathon distance trail champion Kane Reilly pulled out of the race at 60kms: “Not my day athletically but I really enjoyed it. Although I was moving well for the first 20kms I wasn’t feeling good, then the next 20kms were more about enjoying it but suffering, and then the final 20kms were pretty rough and I had to call it at Hout Bay. I had stomach issues and energy just wasn’t there from the beginning, but I got to run the best 60kms of the route.”

South Africa’s ultra-trail running legend Ryan Sandes was a surprise late entry the day before the race, and he says he decided last minute to run as he did not want to miss out: “I have just come back from a project and did a lot of running so I had not planned on entering, but I arrived in the race village on Thursday for the movie evening and I just felt like I had to be a part of it.

“I raced hard the first 20-30kms and I realised I just did not have the legs to roll the dice, so I reverted to plan B which was to run with friends and have a good time out there, and I am super stoked to have been a part of this.”

In a phenomenal performance, Beth Pascall ran out strong from the start and reached the Llandudno aid station (at 45km), six minutes ahead of second and third, at that point Dominika Stelmach (POL) and Emily Hawgood (ZIM), the 2018 women’s race winner.

Pascall increased her lead over the course of the second half and crossed the finish line in 10:55:25, smashing Lucy Bartholomew’s 2017 record of 11 hours 21 minutes. “I was one of a few who had a chance of winning but I did not expect to win like this. I felt really good the whole race. The hardest section was the bit from Hout Bay up to Constantia Nek and then along to Alphen trail - it was easy running, it was runnable, but it was in the sun and I think I got a bit cooked. When we went back into the trees I was fine.

“I enjoyed the whole thing, the atmosphere out there was amazing, my crew was amazing, it was really special.”

Hawgood passed Stelmach at the top of Suther Peak and swopped positions with her until the technical downhill before UCT. Gaps widened between the women and Hawgood came in second (12:03:51), with Stelmach third (12:15:36).

Hawgood says: “I am so stoked. It was such a big day. I took it out really strong; I took some chances in the beginning as I wanted to see how the girls wanted to play the day. It definitely paid off. I could see weaknesses and dropped back. It really helped knowing the course.”

Stelmach says UTCT is a fantastic race; it was her first Ultra-trail World Tour event and only made the decision to race last Friday, “I love Cape Town and visited four times this year. I did not expect the race to be so difficult though. This is the most beautiful race I have ever run.” 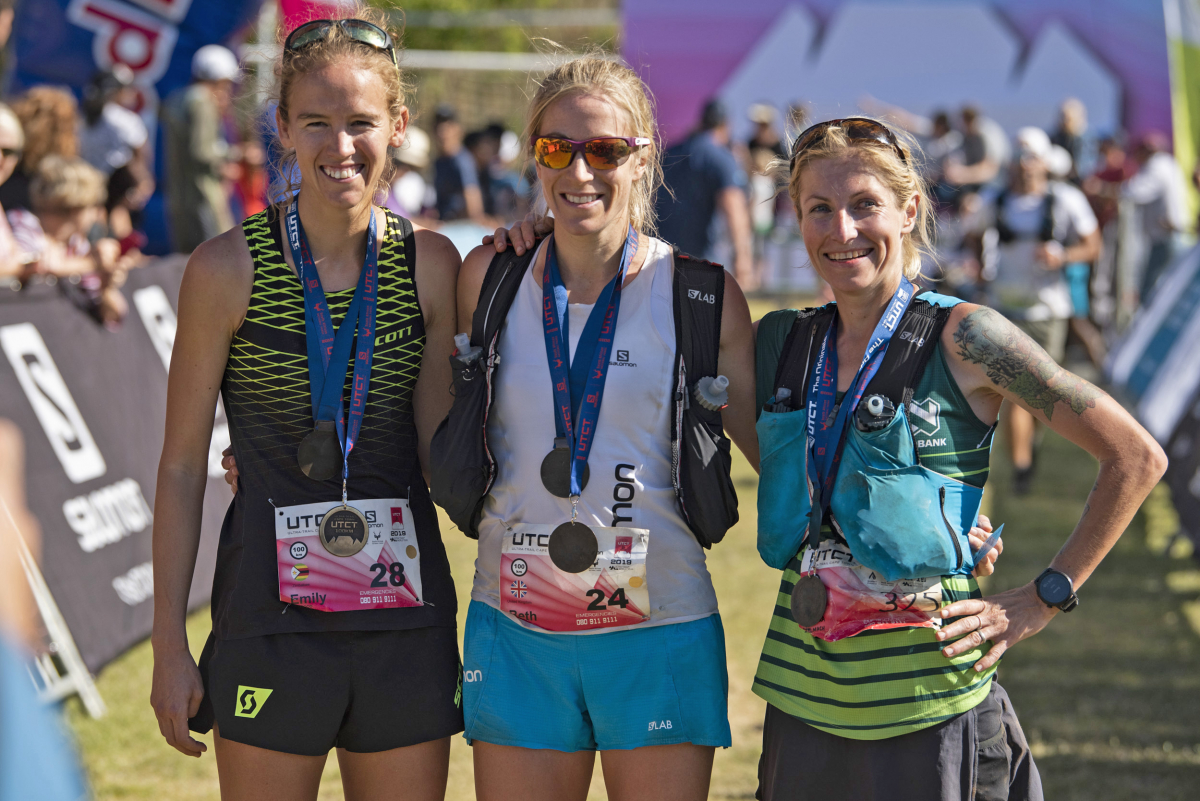 Other South African elites were expected to perform well, but Landie Greyling did not start the race due to an injury and Naomi Brand exited the race before the finish.

Race Director Nic Bornman says, “Every year we see this race grow, but what stands out for me this year is how many Capetonians were here. It was not just trail runners out there supporting and we are thrilled that greater Cape Town is getting behind the event. Having the men and women’s races being won by internationals in a highly competitive field reflects one of the benefits we experience by being part of the Ultra-trail World Tour.”

Irishman Paddy O’Leary who placed 10th, described his experience: “Just the scenery and terrain along Table Mountain and the UTCT course blew my mind. Maybe one of my most memorable moments this year or maybe in trail running in general, was climbing up the [Platteklip] gorge into a sea of fog with the bagpipes playing above you. It was like it drew you up the climb. I had goosebumps and the hair was sticking up on the back of my neck.”

For full results go to www.ultratrailcapetown.com