Submitted by Wildrunner on 15 December 2017

One of the great mysteries of life is where the socks go. Is there a secret conversation that happens in sock factories the world over? Do they conspire in their infancy to escape to a happy sock place, where the singles mingle, free to partner as they wish after escaping the tedium of a life spent to the left, or the right, of their exact double? We might never know, and we might never find them, but rest assured there are some exceptional people ready and willing to find us mountain users, and we’re selling socks to support their efforts. It just seemed fitting.

Wilderness Search & Rescue (WSAR) is the official agency authorised by the Western Cape Government to manage and execute wilderness related search, rescue and recovery operations in co-operation with the other official authorities.

WSAR is the umbrella body that combines the official government organisations and departments with the skills and competencies of the numerous volunteer organisations whose members spend their available time enjoying the great outdoors. There are twenty different organisations from the SA Police Services and SA Air Force to Emergency Medical Services and the various Mountain Clubs, Hiking Clubs and Four Wheel Drive Clubs and other related organisation that make up WSAR.

Trail Series® or at our Trail Store during the Series®, we’ll donate R20 for every pair purchased to WSAR.

The inaugural JMC was a watershed event in SA trail running history and a defining one when it comes to understanding the necessity of compulsory kit.  To be frank the weather was pretty poor that morning.  Reports back to race control by Paul van Spronsen at 6:30am from 1000m was: “Anybody not properly kitted and who finds themselves unable to run further will die!” This was quoted to the runners by the race director at the start, in an attempt to get less experienced trail runners to downgrade from the then 30km to the 19km.  Unfortunately the weather was deceptively warm and wet at the start and resulted in many an “elite” runner deciding to dump some of their compulsory kit before the start, a decision which resulted in a life-threatening situation as the day unfolded.

All was well until 10:51 when Paul found a severely hypothermic runner at 1200m up high on the 30km route - just below the highest point. The conditions at her position at this stage were wild. A 25 knot NW wind was driving sleet into the faces of runners with a wind chill factor in the sub-zero range. Paul battled on with her until 11:25 when he stopped and set up an emergency shelter as best he could. She was incoherent at this stage and soon fell into a coma.  At 11:25 race control activated WSAR. WSAR arrived at her position at 15:38 - over four hours later. We had in the interim activated more support to Paul’s position to assist not only the patient but each other. Crucial to this was Mark, brother of Wildrunner owner Owen Middleton, who had with him extra dry and warm kit.

To cut a long story short the weather was too bad for Skymed to assist and the rescue took 43 volunteers and until 8pm to get her off the mountain and into the closest vehicle extraction point at Witbrug. That’s a rescue time of 8hrs 35min.

The most important lessons any trail runner can take from this include:

At 10:21 Jacques Albertyn was airlifted from near West Peak at 1000m up after suffering a mild fit and losing feeling in his leg. The report was received from our CP1 via VHF radio at 09:40 and we immediately called it into WSAR for assistance.  The weather was perfect so the rescue was swift.

We had a double whammy of helicopter rescues in 2013.  Bryan Allot tripped near CP2 and managed to fracture his hip.  He described having to use every piece of his compulsory kit, and this on a perfect day in 20 deg C. He was stabilized by our ground team and airlifted within an hour and half.  At the same time we had another call out on West Peak of a lady with a badly twisted ankle.

Rob Nel, a trail runner, Medical Rescue Technician and trainee Incident Commander with the WSAR team, says his longest rescue was during winter 2016, when he spent the whole night huddled under Tweede Waterfal in Jonkershoek with a severely injured patient. Skymed could only attend to them in the light of the following morning, and descended in to the gorge to ferry additional technical equipment before hoisting the patient out to an awaiting ambulance.

First Hand Experience of a Rescue:

My husband and a friend went to Cobham for an overnight hike, aiming to spend the night in Gxalingenwa Cave. None of us had been there before, but we read detailed instructions online, printed them out, bought a map, and felt fairly confident. The hike was misty from the start, our feet got wet from the gras dripping into our boots, and all I could think about to keep going with my huge heavy backpack was how lovely it would be in the warm, dry cave.

We couldn't find the cave.

It was getting late and visibility was getting worse. We decided to turn around and retrace our steps back to the car and sleep in it, even if it meant trekking into the night.

Wrong turn, more back tracking, second-guessing, and eventually we are freezing cold at 9pm and the trail appears to disappear off the edge of a cliff. We stopped and got out the emergency numbers from the mountain register. I was the only one with signal. The first two didn't work, but luckily the third took me through to a very flustered woman, who got me in touch with the local MCSA man in charge. I described where we were headed and how we got off course.

We got into our sleeping bags, under the tarp which I'd had the forethought to bring, and tried to sleep. We shivered intensely, water dripping onto our foreheads through the tarp.

Somehow we fell asleep, but we were woken by voices at about 2am. Our friend, Jon, sat bolt upright and called to them. I skrikked because I was certain it was the Basotho thieves we had been warned about. It wasn't. It was four wonderful humans who had got themselves up and awake to save three miserable, badly prepared hikers.

Sonya Ried, a paramedic who I've since befriended, brought sweet hot rooibos in a flask. Another of our rescuers handed out Cadburys Wholenut. We packed up and followed them along the Gxalingenwa Valley towards the base of Sani Pass. We were way off course.

One of them kindly carried the 12kg backpack I had become too tired to hump, while I carried his smaller pack. I tried not to think of my new DSLR camera inside it while he volunteered to check-out each of the five waist-deep river crossings ahead of the rest of us.

At the onset of our hike, we had removed shoes and socks to cross even ankle-deep rivers. Now we chugged straight through, our waterproof boots turning to buckets, weighed down but strangely pleasant.

Eventually we got to the base of Sani Pass, and a volunteer's wife was there to bundle us up into her car, lined with newspaper. We took a hasty group photo, us filled with gratitude and shame. The whole lot exhausted. 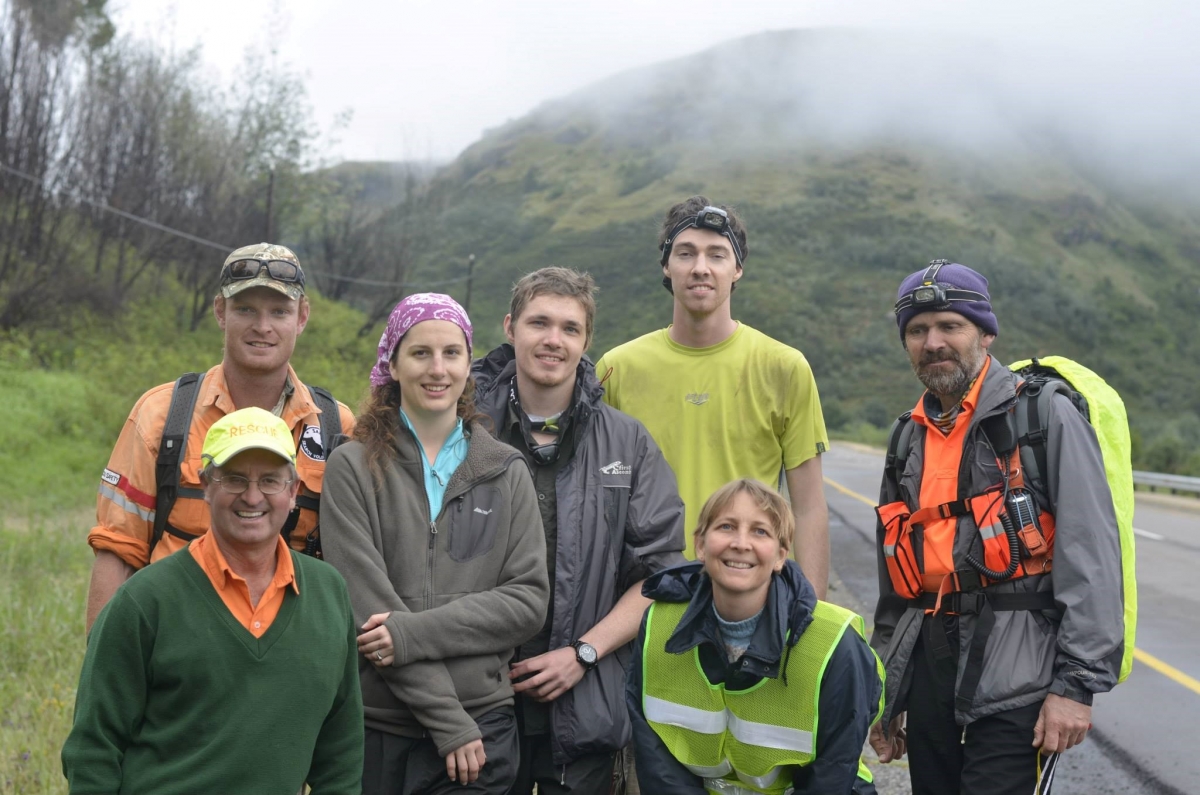 Sheepish hikers Heloise, Travis, and Jon in the back with his eyes closed.

Wildrunner director, Owen Middleton, attended a mountain medicine workshop in 2016 that was presented by MCSA with invitational speakers from the highest ranks in mountain rescue - including representatives from both British and French mountain rescue teams.

The most interesting and relevant facts pertaining to Hypothermia that each and every trail runner should know can be summarised as follows:

In summary, if you get injured in the mountains in anything less than 26 deg C and without any means of locking in your remaining body heat to stay warm, you will suffer from Hypothermia.

Effects of Hypothermia when unchecked:

What steps you could have taken to prevent the above:

As in all cases, prevention is what you are after. 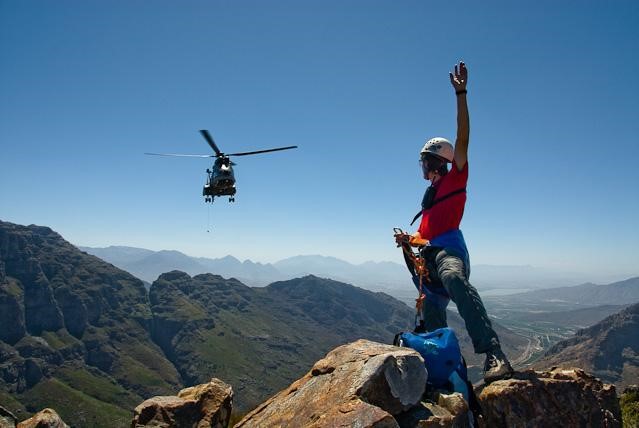