Submitted by Wildrunner on 13 December 2019

On Friday 9 December, Cape Town resident and mountain runner, Hugh Hacking, took one of those calls that every dog owner dreads. He stepped out of a meeting to receive the news from his wife, Jess, that their 1 year old Ridgeback pup, Rusty, was missing in the Newlands Forest area. What transpired was an epic example of community support, canine loyalty and a story with all the potential to become a Hallmark movie.

Hugh and Jess have two fur-kids, Rusty and a German Shepard called Buster. Although they run them on the mountain regularly, Rusty in particular needs more than the usual daily jaunt, so they have additional walks with a dog walking service called Cloud Canine. His Cloud Canine carer parked at the gates of Rhodes Memorial, and took the hounds on a familiar walk up towards the jeep track. Whilst off leash, a car startled Rusty, and he bolted out of the gates and along the M3 towards Newlands Forest. Caro from Cloud Canine reacted promptly, alerting Jess and various social media platforms. By the time Hugh arrived with his hastily donned running kit, many Cape Town residents were sharing Rusty’s photograph and relevant contact numbers. The search was on. 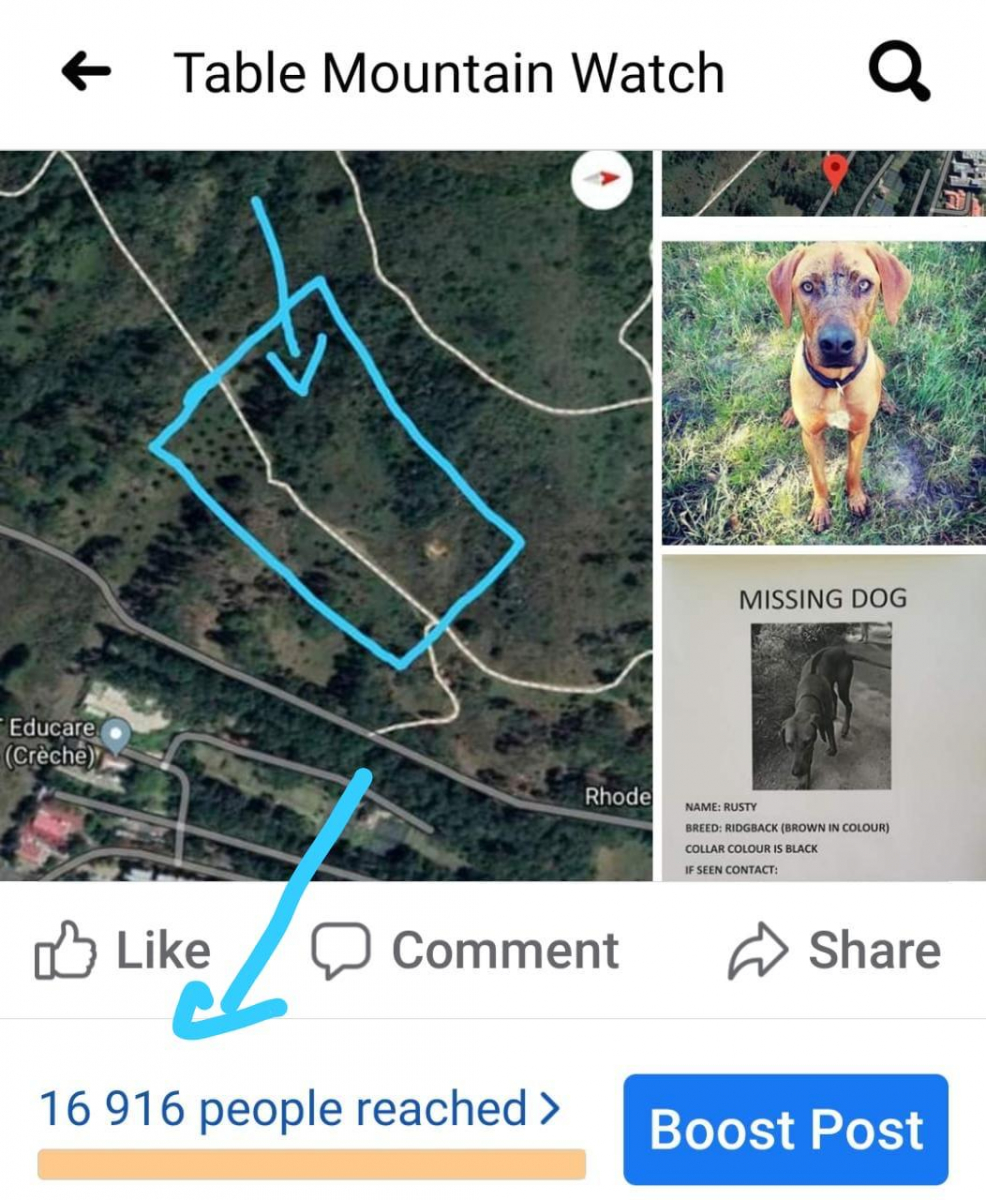 Hugh ran his familiar dog-walking routes, and eventually came down in to Newlands Forest at the Fire Base, to report Rusty missing. The SANParks rangers got on board, sharing images of Rusty with the crew on the ground. Word spread to security companies in the area, and an alert was put out via the Table Mountain Watch Group, with some 16 000 shares of Rusty’s photograph resulting.

Trail running groups joined the Friday evening search efforts, but Rusty remained very much at large. A dog like Rusty can cover many kilometres in a short space of time, so it was difficult to know exactly where he was when night fell. Hugh and Jess had to return home. Later that night, a message came via a Pinelands resident, to say that Rusty had been spotted on the M3 highway, so Hugh went out again, this time in his car, but to no avail.

By sunrise on Saturday morning, the search was back on. A SANParks ranger reported spotting Rusty between Rhodes Memorial and the Blockhouse, but the ranger was on a motorbike which spooked the young pup, so he bolted once again. Security guards, construction workers and neighbours had all joined the search, or were keeping Hugh and Jess updated with information. On Saturday evening, Hugh was once again combing the Rhodes Memorial area with Buster at his side, when the German Shepard picked up Rusty’s scent. SANParks confirmed that Rusty had been spotted in the area, and his canine brother knew it to be true. After hours of bush whacking in the area, Hugh returned home with just one dog.

The search resumed at sunrise on Sunday morning. Hugh and Buster returned to the trails surrounding Rhodes Memorial, and shortly after their arrival, they caught sight of Rusty. Hugh banged on his food bowl, which he had brought along knowing that it was a sure way to bring Rusty running to him on any normal day. But Rusty, exhausted and confused by now, ran in the opposite direction. In the hours that followed, Buster gave Hugh moments of hope, as he repeatedly darted off in to the bushes in pursuit of Rusty, but it always seemed they were a little too late, or just off the mark. They climbed in the direction that Rusty had bolted, and all of a sudden, on a rise, there he was. This time Hugh sat down on the trail, a tactic Jess had read about in trying to get a frightened dog to return to you, and Buster took off. Every bit of his German Shepard herding instinct was in play; he was not letting his little brother spend another night on the mountain. Heroically, Buster brought Rusty right to Hugh, where he was promptly leashed, and offered a bowl of food.

Hugh laughed at the rapid pace at which he wolfed down this bowl of food, and then spread the word that a now famous Rusty the Ridgeback, was on his way home for some much needed TLC. 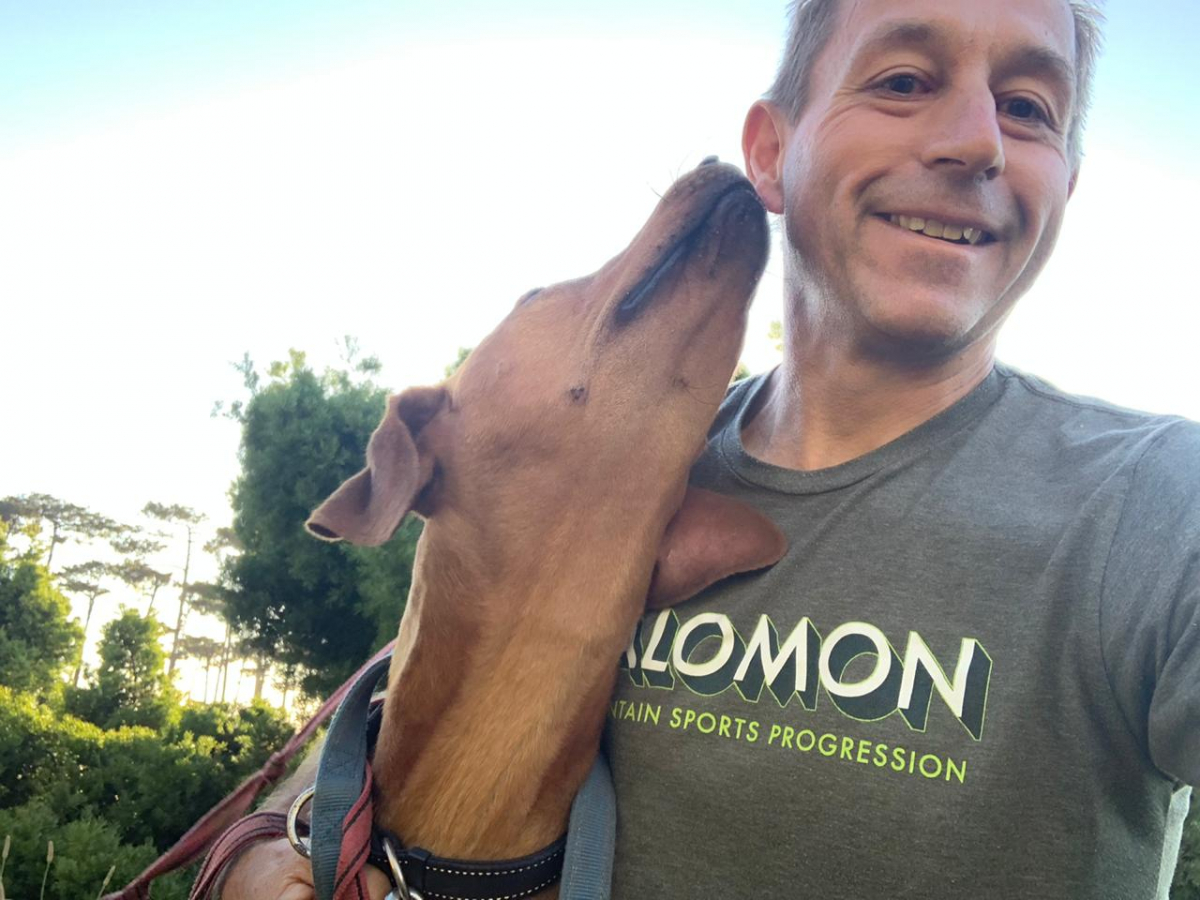 Hugh describes the ordeal as the ultimate example of community support. “Through those 40 hours of worry, I was so touched by all the care and support from so many people, including our friends and family, and all the strangers. Jean from Pinelands, Antjie, Jamey and Jon from Cloud Canine, the Newlands Fire Base, Table Mountain Watch, CSCID, the University of Cape Town Security, and especially SANParks and their amazing rangers. It is such a counter-narrative to all the negative media we are exposed to.”

And what of Buster, the hero? Well, he hasn’t let Rusty out of his sight since his widely celebrated home coming. Not all heroes wear capes. 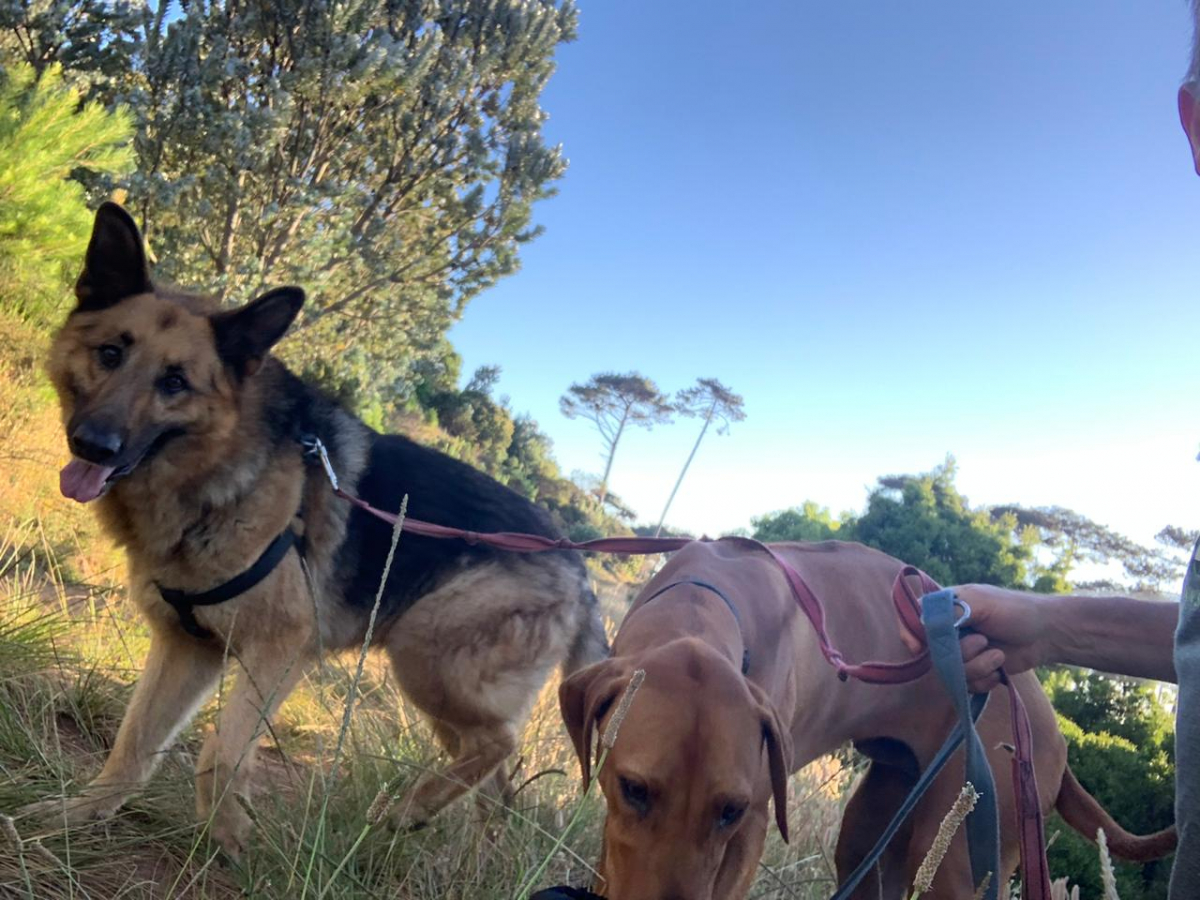