More from the No Meat Athletes | Wildrunner
Skip to main content

More from the No Meat Athletes

Submitted by Wildrunner on 05 April 2018

In this feature piece, we share advice and recipes from power couple, Jana and Simon de Waal from Stellenbosch. Jana has adopted a completely vegan lifestyle, while Simon follows a vegetarian eating plan. Together, they make running, and ethical eating, look pretty easy. 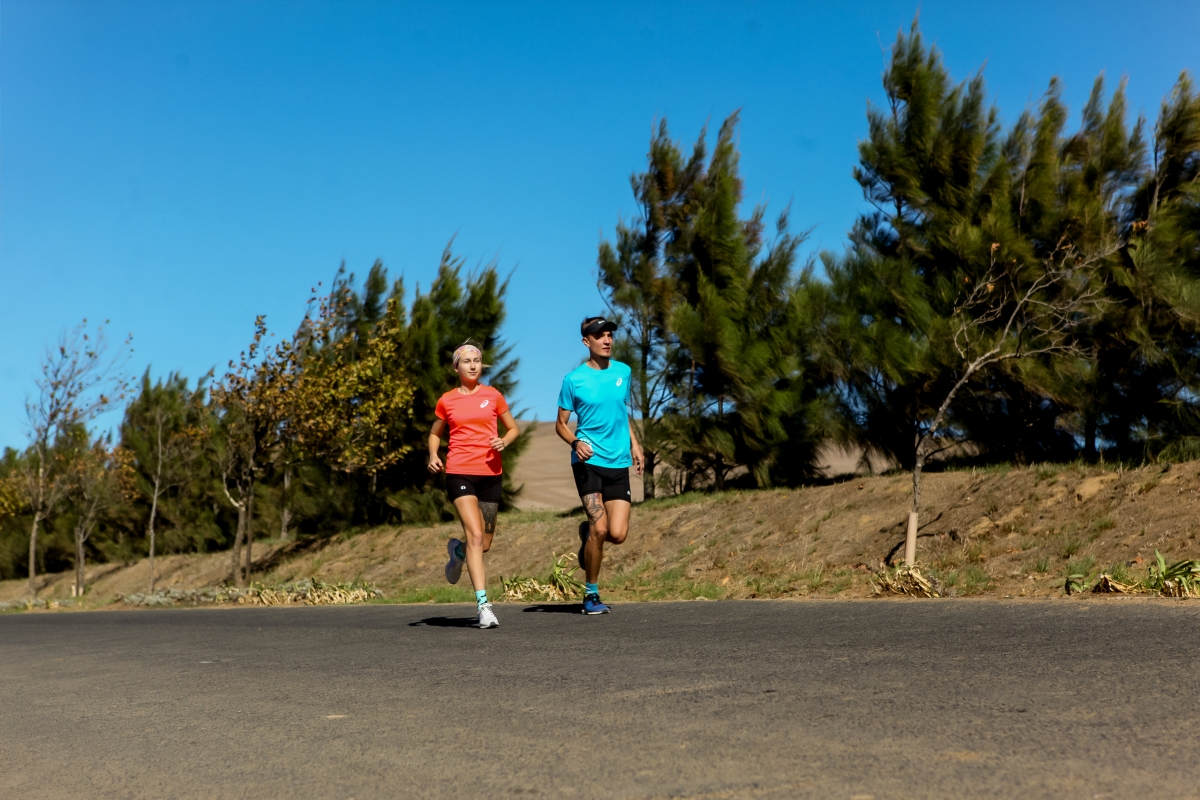 Jana (25) in an attorney, and trains on the trails of the Stellenbosch farming areas, Kuilsriver, Durbanville and Table Mountain.

“I started running in 2015 and took to trail running immediately. During a good training period, I typically train 5 or 6 times a week but on average throughout the year it’s probably more accurate to say 4 runs per week. I currently race mainly short to medium distance trails, between 15 and 30km. I have also completed stage races like African X and Southern Cross Trail Run (SOX). I would like to move on to longer distances soon but my sport scientist husband has been very hesitant and careful to encourage me not to run ultras at too young an age or with too few running years under my belt. Running goals for the year include completing the Bos Sport Mountain Challenge Series (Lite), a sub 1:35 half marathon, my first marathon (Cape Town Marathon) and finally the UTCT 65km.”

Simon (26) is a lecturer and sport scientist and trails predominantly in and around Stellenbosch.

“I generally run competitively between 15km - 25km, but have been known to do multi-day events (African-X, Simonsberg Fairtree) as well as the occasional longer trail event (Silvermine XL) as well as several shorter events. I tend to train 6 - 7 times a week when I'm in a good training block. Sometimes up to 9 - 11 times a week, but that does not include running specific training only. I have recently given up a lot of other extra-mural activities to focus on the running. My goals for this year are; to improve my speed by implementing some road running tempo and speed training (sub 1h30min half marathon), to run my first marathon (Cape Town Marathon), to place in the top 5% in the Bos Sport Mountain Challenge Series (Lite), and to run my first Ultra Marathon (UTCT 65km).”

Jana is strictly vegan, which means that she does not use or consume any animal products. Therefore, she does not eat meat, eggs, fish, dairy or honey, nor would she wear clothes or use skin care products that contain any of the above. She has been vegan since returning from their honeymoon in December 2016, but was vegetarian for a short while prior. Her choice to follow this way of life is based on ethics.

“It is common for me not to be able to eat anything (or barely anything) at aid stations at races and this is mainly due to the fact that people, be it volunteers setting up the station or race organisers, are not aware that there are many vegan-friendly aid station options: gelatine-free gummy sweeties (normal gummy sweets aren’t even vegetarian-friendly because of gelatine), cereal bars (without milk powder – e.g. dark chocolate jungle oats bar), cookies (Oreos and Ginger Nuts are vegan!) sarmie toppings (everyone loves peanut butter) etc. These are all cheap, non-superfood options that everyone knows but then of course there are amazing healthier options like Superbar, Nakd and Trek. Generic running fuel like energy gels and chews are also often vegan – including most of the GU and 32GI ranges.”

“My trail fuel type is vegetarian. This means that I eat no animal flesh but I do eat animal products such as; dairy, eggs, honey etc. I have been a vegetarian for approximately 18 months now. I made this decision after realising the cost of animal life to fuel my diet. Prior to this realisation, I never gave any thought into what I put into my body. I now truly feel I value ALL animal lives as my own. I didn't transition to vegetarianism immediately but rather used a systematic process over a period of months to gradually cut out all meat from my diet. I started with meatless Mondays, then moved onto two days per week without meat, then two days a week with meat, then meat only on weekends, then meat once a week, then only one meal with meat in per week, until I eventually cut it out completely. Since I have become vegetarian, I have without a doubt become a better runner. Whether this is to do with a change in diet, or simply because I have many more miles under my belt than I did before - is up to you to decide (although my suggestion is that it has nothing to do with my diet). I have absolutely no challenges following this eating plan, bar ignorant people not understanding my decision.”

Misconceptions around meat-free eating are rife. Vegans are frequently perceived to be scrawny, protein-deficient and weak, and those that choose a meat-free are criticised for being radical, unhealthy or a little on the preachy side.

Simon has faced a few challenges, but none that are easily overcome.

“(On a run) I eat just about anything; energy bars, rusks, bananas, peanut butter sandwiches, potatoes, date balls etc. My favourite recovery food would be any mix of protein and carb (I have no favourite), and my top recovery drink is certainly a beer. My suggestion to anyone following this diet plan is to do it for the right reasons. I have no illusions as to whether there may be "healthier" diets out there than vegetarianism or veganism, however, if you take this step, you will feel empowered by your decision that you make three times a day every day not to take an animal life. It's easier to change your diet when you do it together with someone, so find a friend/partner who you can vent with, eat with, prep food with and eat out with. Don't push the narrative of vegetarian / vegan people being hippies who love animals more than humans - it doesn't help the cause. Also don't go showing every Tom, Dick and Harry Earthlings or that movie you watched where animals are slaughtered in their thousands, just be you, be cool, and also be vegetarian. I Google vegetarian recipes and then I make food, Google is amazing. We usually shop at Woolies. They have the best range of vegetarian and vegan options out of all the major supermarkets. My wife often shops as local produce-type stores. Regularly we will have some sort of plant protein on our list to supplement our meals (think legumes, dark greens, soy, meat replacements).”

On a cold day, she reaches for an almond milk cappuccino, banana and nut butter bagel with dark chocolate shavings, cabernet sauvignon or cabernet franc.

Her pantry staples include organic extra firm tofu, hummus ingredients (so easy to make and very cheap!), avos, sweet potato, gnocchi, seasonal veg, dark chocolate, dates, rice paper (from an Asian supermarket if you are looking for a bargain) to make home-made Vietnamese rainbow rolls which she describes as life-changing.

“Take a leap of faith and try it. If you like cooking then it opens up a whole new world of amazing recipes and creativity in the kitchen. If you don’t like cooking, it has become mainstream enough to easily get hold of ready-made / frozen meals / running fuel. You will be doing your bit for the planet and everyone/thing that inhabits it.”

Date balls with a caffeine kick 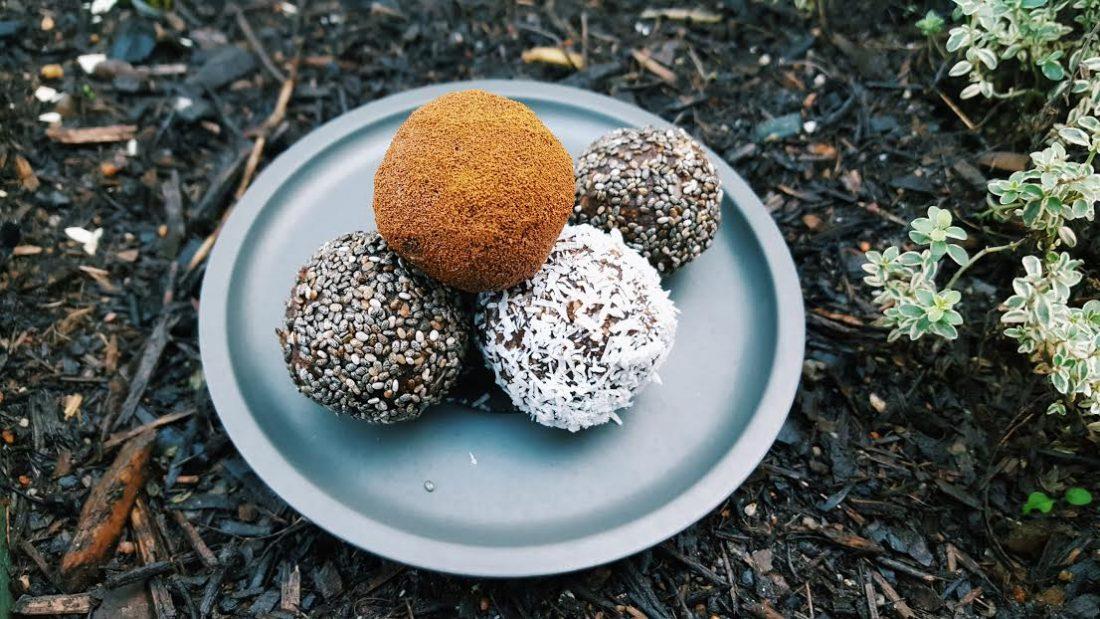 Once formed, roll in your choice of decoration until the outside is evenly covered, pop into a Tupperware and you’re ready for your next adventure! Alternatively, put them into the freezer for storage up to a month. I’ll admit I like eating them straight out of the freezer.