Submitted by Wildrunner on 08 April 2019

“The Race that Eats its Young”… that either turns you right off, or triggers your need to know more. There are documentaries on it, there are rumours, some legends and there may or may not have been a book written about it. Participants aren’t supposed to share much, tradition dictates. No one has a real handle on what goes down in Frozen Head State Park near Wartnurg, Tennessee, but we know the basics.

If runners complete 60miles (97km) they have the Fun Run badge of honour. The full course is 100miles (160km), and must be completed in 60 hours. The organisers pick a date between late March and Early April each year, and send hopeful participants off to complete the unmarked laps of relentlessly rough terrain, with a vert gain equal to an Everest double if all 160km are nailed. The course was designed by Gary “Lazarus Lake” Cantrell. His inspiration came from the 1977 escape of James Earl Ray, assassin of Martin Luther King Jr, from the nearby Brushy Mountain State Penitentiary. Ray covered only 13km after running 55 hours in the woods. Legend has it that Cantrell claimed to be able to cover 160km in the same time, and the Barkley Marathons was born. He named the event after his neighbour and running companion, Barry Barkley. It has been eating its young since 1986.

He lights a cigarette to send the runners off, and blows a bugle to confirm their DNF.

This year, the usual 40 runners lined up. No one finished, leaving the total number of finishers in the history of the event, at 15. Among the hopefuls was one brave saffer, Gareth Morgan. Gareth is an experienced ultra-runner and hails from Durban. He runs a sub-4 marathon, and has races like the Washie 100-miler under his belt.

His post-race feedback has to be limited to the information that participants are allowed to share. Yes, there is an entry process, and yes, you need to research that for yourself. It does indeed include the supply of a number plate from your country, and a white cotton shirt or pair of socks, and there are a few South African plates in the display.

Gareth goes on to describe the route, “Climbs and descents like I’ve never seen before, ever, and I mean ever! I’m truly surprised that no one has died out there, but as Laz says, if you can’t look after yourself you shouldn’t be there…”

On home ground, we are quite accustomed to thorough race briefings, safety checks, and compulsory kit and, for some races, the supply of a GPX file that can be loaded to a GPS watch. Most of our top trail events are marked or have route indicators and marshalls, sweeps and front runners. Naturally, the Barkley Marathons is a little different.

“So you are given a watch, with a count down timer on it. That’s it. No briefing, no safety checks, nothing. Just be at the gate when the clock is showing 00:00:00 and the objective is to go and find the books over a massive distance. 10 min turns to hours when you are looking for an A5 book in a 40km range in a forest.”

The books that Gareth is referring to are the only check points in play over the entire route. You have to remove a page from the book, ensuring that the page number and your race number coincide. There are a few books out on the course, each lap an estimate 40km if you don’t get too lost.

Weather for the 2019 event was pretty standard by Gareth’s account. “The day started out a magic 21 degrees, then hell froze over, and I’m not joking. Dropping between -8 on top, and I registered -4 near the bottom of the mountain. Snow, hail, sleet, rain… what a great mix and of course no lights to be seen for miles. It’s dark out there and this park has a micro climate going on…” 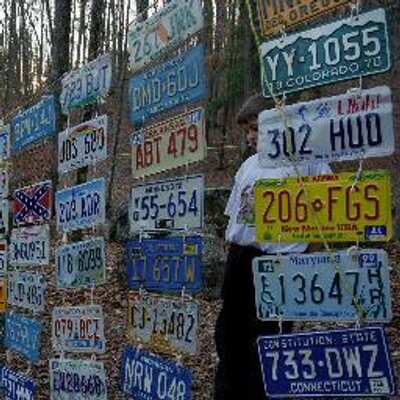 Gareth was not the only runner with a DNF this year. Unable to complete even one lap in the prescribed time, he joins a proud history of top runners from across the globe who have experienced the same. This year had a shiny line up including elites from all over the world. Guillaume Calmettes, a previous winner of Big’s Backyard Ultra – another race created by Barkley Marathons co-founder – and the current Appalachian Trail through-hiking record holder Karel Sabbe of Belgium. The field also included two returning Barkley finishers in Jared Campbell – the only person to complete it three times – and John Kelly, who finished the race two years ago. No one beat the bugle.

Gareth is reportedly happy with his first attempt at the race (does that mean he is going back for more?!). “When the bugle was blown, I went to (support crew) Glenn and Jim and gave them both frights and demanded a bourbon for all my efforts, at around 6am. I had been out for 21 hours.

It’s very clear if you have done it before you have a clear advantage, or you follow a vet. You also need to understand the American lingo. I went out with a search party for a runner after I got back. In total it was what I expected; to be put in to an uncomfortable situation and take it from there. All I can say is that I got timed out on loop 1, 20 hours and 30min.”

An article  by Runner’s World South Africa describes how the full 2019 event unfolded.

Keen to join the likes of Gareth in the 2020 edition? We cannot guide you further than to spend some time on Google, and YouTube. Happy researching…