In the early hours of Sunday 25 June 2017, it became clear that South Africa’s Ryan Sandes was going to realise his big dream with a win at the world’s favourite 100 mile race; Western States. We cheered, flicking between Twitter handles, glued to our phones, laptops and tablets as the live streaming showed baby Max crawling across the finish line on that hallowed track, just moments before daddy ran in, claiming first place and silencing anyone that might have thought his career as an endurance running pro was waning. 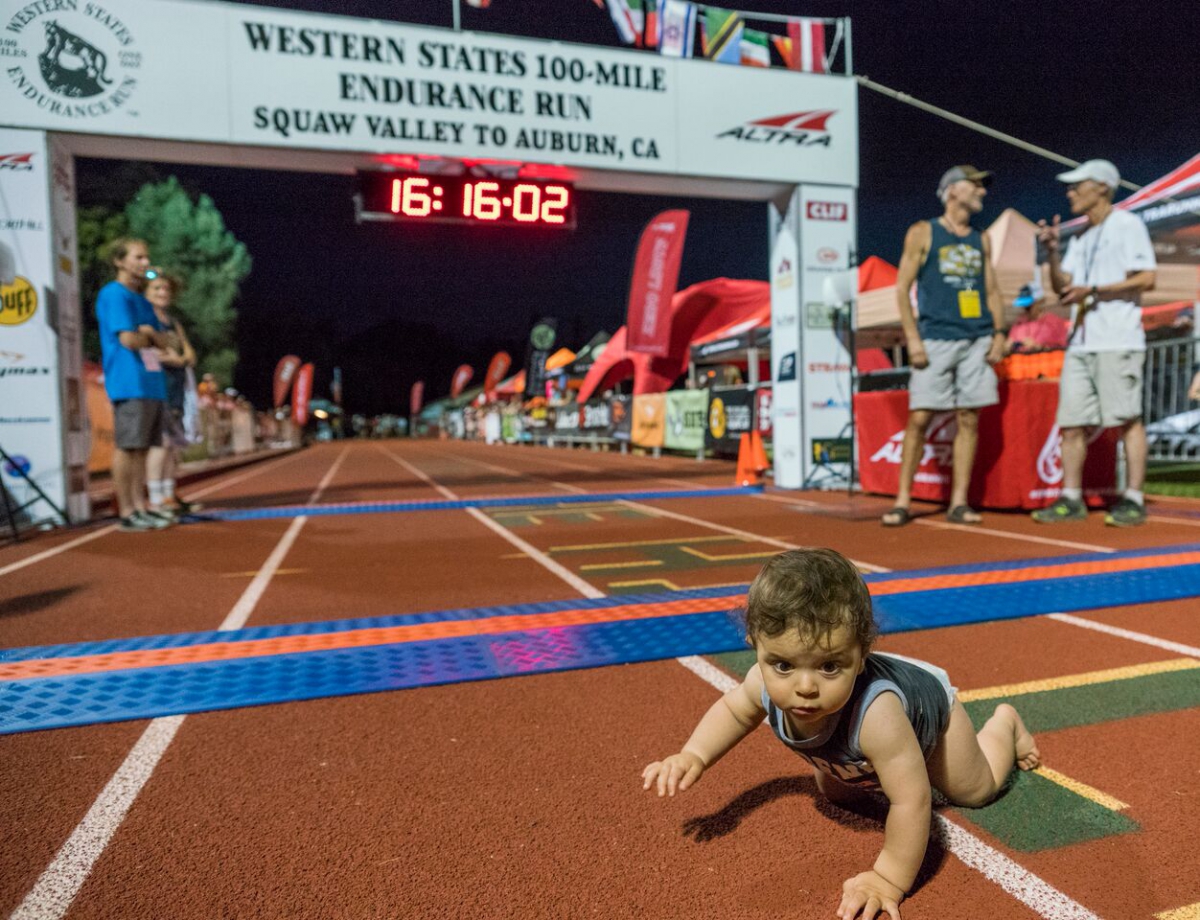 Ryan Sandes, known to many as "Hedgie" was born on 10 March 1982 in Cape Town. In 2010 he became the first competitor to have won all four of the Deserts races. Each of these races spans 6 to 7 days and covers 250km. They are self-supported. The races include the Atacama Desert in Chile, the Gobi Desert in China, the Sahara Desert in Egypt, and lastly Antarctica. To date only 81 individuals have completed all four.

Sandes has also taken top spot in the Sahara race in 2007, the Gobi March in the same year, and was second in 2009 at Racing The Planet in Namibia. He won the Jungle Ultra Marathon in Floresta Nacional do Tapajós in Pará, Brazil where he set a new course record. In 2011 Sandes won the Leadville 100 in 16:46:54, more than 30 minutes ahead of runner up Dylan Bowman. Ryan also won the 2012 North Face 100 in Australia in 09:22:45.

In August 2012, Sandes bettered Russell Pasche's record for the 90K Fish River Canyon hiking trail taking it from 10:54 to 06:57. In 2013 he became the first person to ever win an ultra-trail race on all 7 continents.

Sandes won The North Face Transgrancanaria, on March 1, 2014. After winning, Sandes was temporarily disqualified after a misunderstanding relating to his failing to produce the mandatory emergency blanket from his kit at the finish but his appeal was successful and he was reinstated as winner.

In 2015 the sceptics began to wonder if Sandes was on his way out of the ultra-trail limelight. He had a frustrating DNF at TransVulcania, and was unable to start Western States in the same year due to a stomach virus. Ryan was diagnosed with glandular fever, a lingering viral infection that held him back each time he pushed his system too hard. In 2016 he took third spot at Tarawera Ultra-Trail in New Zealand, then had a spate of fourth positions at Ultra-Trail Australia, Grand Raid of Reunion and was fourth overall in the Ultra-Trail World Tour that year.

In 2017, Ryan had a monkey on his back that needed taming. Having finished runner-up in the 2012 Western States Endurance Run, he came back five years later to take victory in a time of 16:19:38.

Just 24 hours after ripping the winning tape at WS100, Ryan made some time for us, offering the Wildrunner family some insight in to what went in to his planning and preparation, and what went through his head in the final stages of this great race.

Wildrunner: Ryan, that was pure magic for your South African fans, and your fans around the world, too. What was the “fairy dust” at Western States this year?

Ryan: Yes, it was a dream come true for me to win Western States 100. It is the one race I really, really wanted to win, and it has been some journey to get there with many highs and lows. I guess it all just clicked this year. I had a really good feeling about the race this year and felt super relaxed going in. Having (baby) Max, (wife) Vanessa, my Mom and some really good friends out on the course was a huge booster for me, and added a spring to my step.

Wildrunner: How did you go about choosing your pacing team, and what traits did you really appreciate in them?

Ryan: I opted to only have one pacer this year for the final 30kms. I was really lucky to have Ryno Griesel as my pacer who knows me well as we have done a lot of running together. I knew the final 30kms was where the race was going to be won or lost and having a pacer to give you a mental boost makes a huge difference. Ryno was awesome. I hit my lowest point just before he started pacing me and mentally I was a little out of it. He helped me pull things back together and win the race.

Vanessa was in charge of crewing for me - she is a rockstar and knows exactly what I need at the aid stations. It was definitely a huge team effort out there on Saturday. 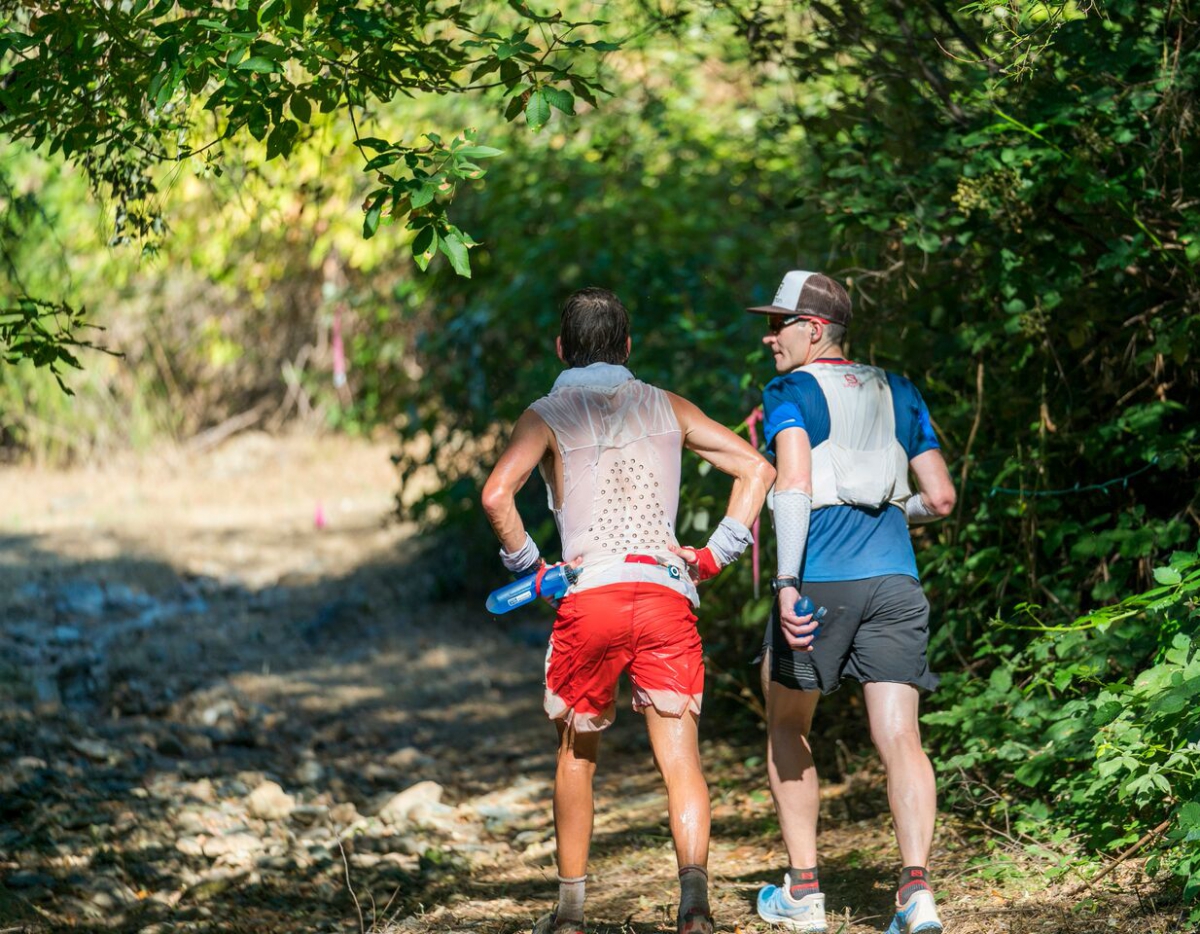 Wildrunner: Any hallucinations out there?

Ryan: Nope, but I was super tired towards the end of the race.

Wildrunner: What mantra got stuck in your head? Lyrics from a song, one line of something that someone said? US endurance runner Devon Yanko once said that she got stuck on 1,2,3,4 on repeat, counting her own strides. Anything similar?

Ryan: (Laughing) I saw a sign that said 'Not even Chuck Norris has run Western States' with about 8kms to go. That was pretty funny, and cheered me up for the final 8kms. Ha! I repeated that to myself a few times.

Wildrunner: Western States is set in the Sierra Nevada Mountains, the race climbs over 5500m and descends over 7000m. Thick snow towards the beginning, and temperatures reaching over 40 degrees by the end. Apart from that 40 degree Addo 76km race, what other heat training or tricks went in to WS prep?

Ryan: Yes, Addo was hot! I did a bit of sauna training and then on race day I put a big emphasis on cooling myself down at the aid stations. I used an ice hat, ice Buff and cooling sleeves which worked really well. I also dipped myself in a number of the river crossings. 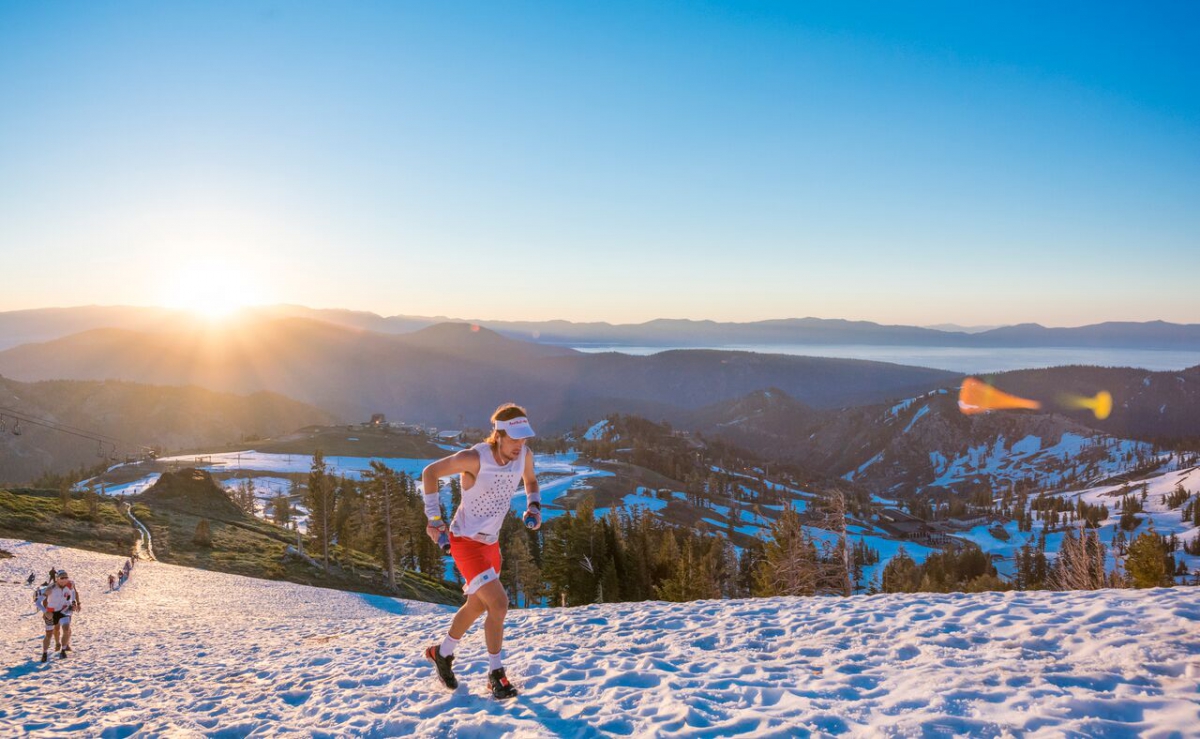 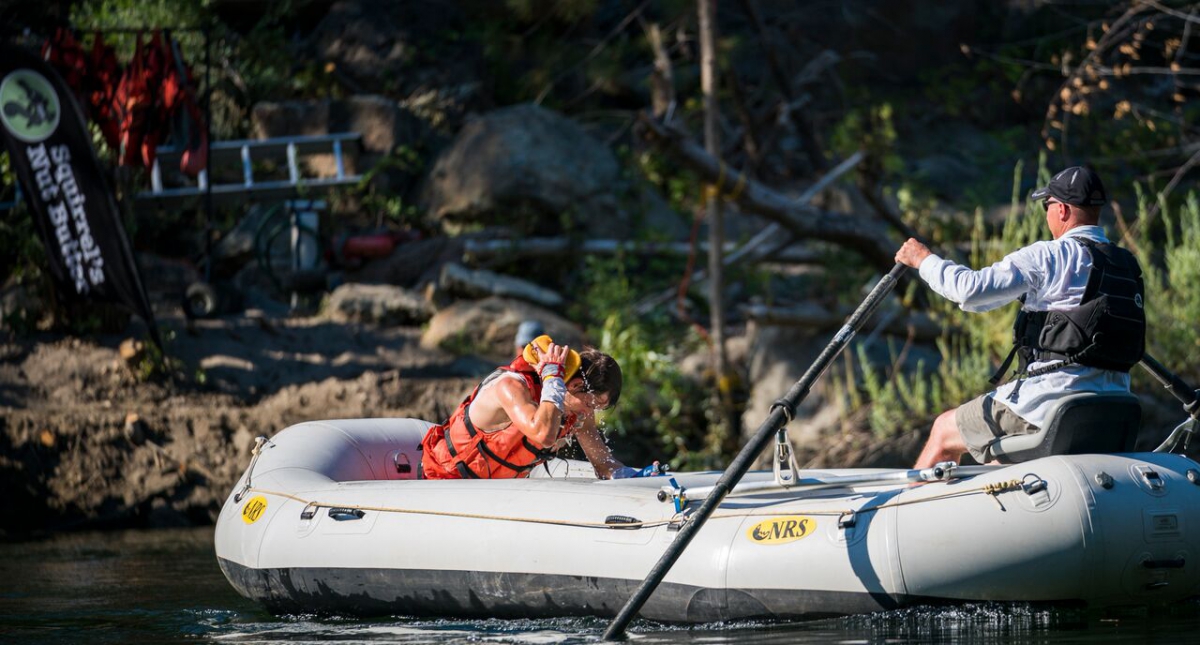 Ryan is in recovery mode, but will be racing Ultra-Trail Mount Blanc CCC (100km) on 1 September this year, and has indicated that Ultra-Trail Cape Town (100km) is on his radar for December. We’re looking forward to welcoming Ryan back to our local trails, and can’t thank him enough for the kind of inspiration and pride he brings to South African trail running. “Hedgie” has many lessons for us all; he remains humble, honest and grounded as a family man and the kind of mate that still enjoys a beer and a chat about life like anyone else. But the biggest lesson in his journey to top spot at Western States is not just to hang on to a dream, but to give it all you have. 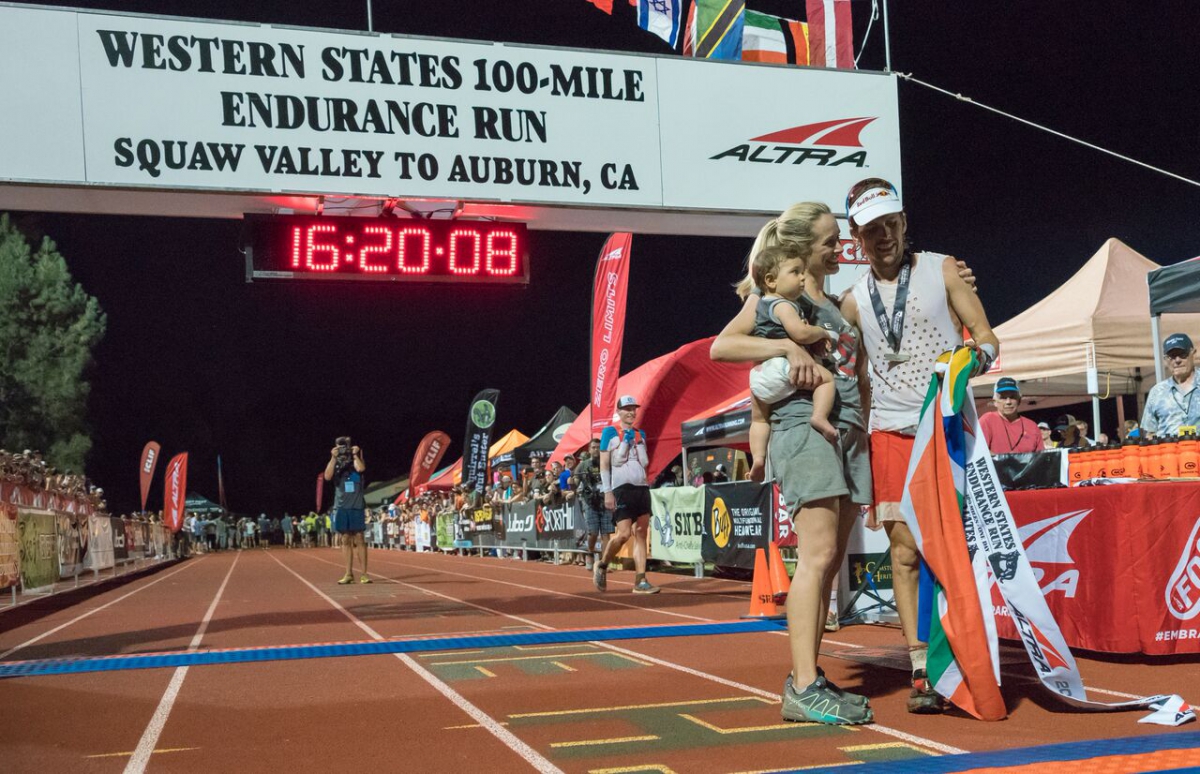